Innovation as a key driver to address water-related issues

Big cities like Paris and London have developed complex business ecosystems and offer examples to be followed by São Paulo. In Brazil, there are several opportunities to access resources for projects that aim to solve social issues, such as health and sanitation

For most people, the concept of “innovation” is mostly associated with a distant future. They are wrong, as innovation has been part of our life since the beginning of time.

Similarly, “innovation” is mainly linked, in popular belief, with technological evolution. And this is true. Partially. Today’s technological progress, which translates into the available digital tools and services are now indispensable in the utility sectors. However, “innovation” should not be perceived solely on technological level, as we continuously innovate the way we do business, the way we regulate them, the way we consume different products and services. And, as mentioned, we have been doing that since the beginning of time.

In the water sector, we’ve been innovating…

While cities, as a form of community organization, offer immense economical and social growth potential, they come with tremendous challenges.

Dense urban areas face vast issues in providing universal access to utility services, in an efficient and cost-effective way. Moreover, although coastal cities offer numerous economic opportunities (trading, fishing, tourism), they are even more at risk, as climate change is causing a steady sea/ocean level rise. Miami’s issues or Venice’s struggles, for instance, have solutions, as adaptation measures have been identified – underwater floodgates, adding steps and layers to the cities’ most endangered regions, even more effective seawalls or improved pump systems, just to name a few.

On the other side of the world, Singapore is the golden standard for circular economy in the water sector. Although the city is water-scarce (it imports more than half of its water needs), it has a complex system of collecting every drop of the wastewater, reuse it continuously, and use desalination for turning seawater into drinking water. However, the recycling process is the most impressive one, as the city’s recycled water meets 40% of the water demand, a figure expected to increase to 55%, in 2060.

Coast cities or urban areas that have been established on major natural flowing watercourses have a tremendous economic and touristic potential. While they also face recurrent or even chronic issues with rivers, cities like Paris (with the Seine river) or London (with the Thames river) have developed complex business ecosystems — examples to be followed by São Paulo.

In most situations, rural wastewater is directly discharged to lands or water streams/bodies, causing numerous economic, social, and health issues, as well as long-lasting environmental degradation of water sources and land.

But deploying proper centralized wastewater treatment systems for these areas is always expensive and most of the time a poor economic decision. But this should not be the end of the story although, unfortunately, this is often the case.

While passive systems have always been developed by people, innovation has led to efficient and cost-effective decentralized solutions that treat the water locally and even reuse it for agricultural purposes. That involves separating “brown and yellow water” (toilet waste) from “grey water” (showers, sinks, washing appliances) and waste-treating them separately. The “grey water” is treated in a conventional septic tank, then further treated in a wetland and used for irrigation. The “brown” water is transformed into a highly fertile black soil, while the “yellow” one is stored anaerobically. The mixture of these two outputs is then used as fertilizer.

Proofs that innovation is not a term of the future are decentralized solutions for irrigation. As some agricultural areas are far from both the electricity and the water infrastructure, decentralized irrigation systems have to be considered.

Today’s decentralized electricity systems have evolved significantly, solar panels being now more affordable than ever. However, the period of highest daily electricity production (when the sun is up) may not coincide with the best irrigation moment of the day, as watering during high sun radiation is not recommended. For these reasons, either electricity storage (batteries) and/or water storage (in water tanks) is recommended.

The latter suits even better with dripping irrigation systems (thus, using the potential energy of the water in tanks). Israel has spearheaded this approach in the past decades (today, 85% of the country’s irrigated farms utilize drip irrigation systems) and it’s now even leading the efforts in digital farming.

The role of collaboration for accelerating innovation

Although most of the above mentioned solutions are innovative or somewhat new, the answer to basic challenges (e.g. water pumps in rural areas) has been known for decades. The trick is to find the proper way to generate investments, reaching the remote regions of the country. As already discussed in our first article, the Brazilian public sector has underinvested to address the gap in water services, especially due to the lack of political will and continuous budget constraints. As a result, according to IBGE, only 58% of the urban population has sewage treatment systems, while in rural areas the number drops to 38%.

In addition to creative solutions, it is essential to explore different forms of cooperation to overcome the barriers of political will and budget limitations. A variety of stakeholders, tools, and approaches can enhance the ability to implement ideas, such as the ones mentioned in the previous sections. For this, it is necessary to employ a systemic thinking, understanding each of the different “drivers” of innovation, as described in the infographic below. 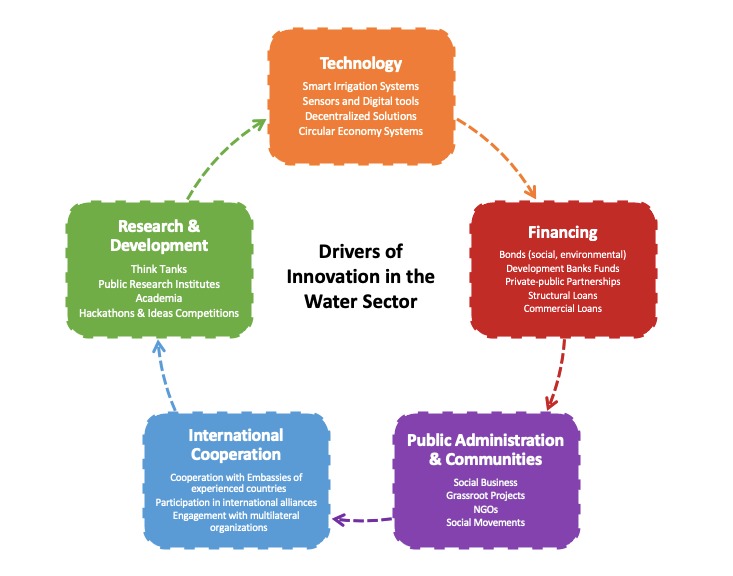 The absence of direct public money should no longer be an excuse to overcome Brazil’s shameful lack of treated water. In addition to the private investment expected after the approval of the new sanitation framework (approximately R$700 billion, in 10 years), bonds linked to ESG targets (environmental, social, and governance) are becoming an additional relevant funding source.

In Brazil, there are several opportunities to access resources for projects that aim to solve social issues, such as health and sanitation. For instance, last month, Banco ABC, in partnership with IDB Invest (Inter-American Development Bank), issued R$525 million in social bonds to support medium-sized companies, as well as bigger private entities working in the health sector.

Additionally, the work of grassroots initiatives and social organizations is essential to promote progress in this field. The presence of these actors plays a fundamental role in conducting in-depth debates, raising awareness among the population, creating initiatives that can stimulate public interest and boost social solutions. For instance, Water.org, a nonprofit developmental aid organization, provides micro-credit to low-income families for installing bathrooms in more than 13 countries, including Brazil.

International actors should also be involved. Thus, public and private leaders should seek to develop solutions based on international experience, brought by cooperation with embassies of countries specialized in these innovations – such as the Netherlands, Israel, or Singapore.

The research and development (R&D) of new technologies – through academia, think tanks, or research institutes – is also essential in the overall innovation process on water-related challenges. To support the activity of these entities, hackathons and competitions of ideas can be developed, to stimulate out-of-the-box solutions.

Having a systemic approach to alternatives, while increasing collaboration and using proper tools is critical in the fight against water issues in Brazil. In this sense, innovation is not only a creative approach, but a continuous process to help public and private leaders to develop feasible solutions.

Luana Tavares has spent the past 15 years dedicating herself to the social impact sector in Brazil, working with several non-profit organizations focused on strengthening democracy and state effectiveness. Between 2013 and 2020, he directed one of the pioneering and most relevant organizations in this field called CLP – Center for Public Leadership, which since 2008 has trained more than 8,000 public leaders throughout Brazil and is informing and engaging society in the defense of a structural national agenda with the National Congress. Luana is also an advisor for Vetor Brasil and Poder do Voto – two social impact organizations focused on increasing the State’s capacity through better people management and strengthening civic participation, respectively. Luana has a degree in advertising, an MBA – Master in Business Administration (Fundação Getúlio Vargas – FGVSP) and two international specializations, one in public management and the other in leadership development, at Harvard Kennedy School and Oxford University. She is currently completing a Master of Public Policy (MPP) at Blavatnik School of Government-Oxford University and developing her Summer Project with the IEPS-Institute for Health Policy Studies.

Andrei Covatariu is a Senior Research Associate at Energy Policy Group and an expert for the United Nations Economic Commission for Europe’s (UNECE) Task Force on Digitalization in Energy. Andrei was the Head of Public Affairs at Enel Romania (2019-2020), previously holding several positions inside the utility company (2014-2019). He was also a Member of the Board of the FEL-100 community (World Energy Council, London), a 2020 Non-resident Fellow at the Middle East Institute (Washington DC), and a 2021 GYCN Climate Ambassador (an initiative of the World Bank Group). Andrei has a bachelor’s and a master’s degree in Nuclear Engineering (Politehnica University of Bucharest), and a master’s degree in Business Administration (Bucharest Academy of Economic Studies). He is currently finalizing a Master in Public Policy (MPP) at the Blavatnik School of Government, University of Oxford, with a Summer Project performed at the Harvard Kennedy School’s Belfer Center for Science and International Affairs – Managing the Atom Project.

Are you sure want to cancel subscription?